AMERICANS ON THE CONTINENT: NEW BEGINNINGS This weekend signaled the beginning of the new season 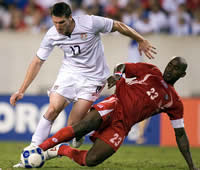 for many of the continental European leagues, with new 1860 Munich signing Kenny Cooper got his side off to a winning start in the 2. Bundesliga.

Following his summer signing for 2. Bundesliga side 1860 Munich, former Dallas Burn standout Kenny Cooper made his bow in the 1860 colors over the weekend. Starting brightly, Cooper was presented with his first chance for Die Lowen in the ninth minute, but was unable to get off the mark straightaway as his first attempt at goal was easily corralled by American goalkeeper David Yelldell.

Not to be denied, however, Kenny Cooper latched onto Romanian midfielder Florian Lovin’s cross just eight minutes later. Left free in the box, Cooper directed his headed effort off the bottom of the crossbar and past the helpless TuS Koblenz ‘keeper’s goal.

Staying in the thick of the action, Cooper was involved in a number of other chances before half, with only David Yelldell’s excellent work keeping the scoreline at 1-0.

The second half was much of the same, as Munich doubled the lead on 62 minutes when Kenny Cooper’s strike partner Benjamin Lauth received a deflected pass in the box and buried it with aplomb. Despite having a pair of chances after the 70th minute, Cooper was unable to add to his opening strike, but left the field in the 72th minute to a standing ovation from the 1860 supporters.

See above.
Next up: Away to Hansa Rostock, Saturday, August 15

Michael Bradley and Borussia Monchengladbach’s opening match nearly ended in disaster as lax defending and foolish mistakes allowed VfL Bochum the chance to snatch victory at home. M’Gladbach’s hero at last season’s end, Dante, who scored the goal that kept the Prussian club in the top flight was sent off, and Bradley was yellow carded as Die Fohlen allowed Bochum to return from 3-0 down to draw 3-3.
Next up: vs. Hertha Berlin, Sunday, August 16

After a long injury layoff at the end of last season, Steve Cherundolo returned for Hannover 96 over the weekend, putting in a decent performance but unable to save his side from falling 1-0 away to Hertha Berlin. Hertha midfielder Gojko Kacar found himself on the end of substitute Valeri Domovchiyski’s pass in the 82nd minute, and he slotted clinically past Robert Enke for the winning goal.
Next up: vs. FSV Mainz

Charlie Davies made his Sochaux debut on the opening day of Ligue 1 play, looking dangerous as his new side beat Auxerre 1-0 away. Davies was brought on in the 71st minute for Czech striker and 39th minute goalscorer Vaclav Sverkos. The pacey forward immediately threatened the Auxerre defense, nearly notching a debut goal in the 82nd minute, but was unable to get off the mark so quickly.
Next up: vs. Bordeaux, Saturday, August 15

Carlos Bocanegra and his Rennes teammates dominated the match summarily against newly promoted Boulogne, as Bocanegra went the full 90 for Les Rouge et Noir. Goals from Ismael Bangoura in the seventh minute, Mangane in the 45th, and Jerome Leroy just before the death assured the comfortable win for the Brittany side.
Next up: at Nice, Sunday, August 16

Matt Taylor made his debut for FSV Frankfurt as a second-half substitute, but was unable to rescue them from falling 2-1 to MSV Duisburg.

Benny Feilhaber started in the midfield and went the full 90 as AGF Aarhus beat HB Koge 2-1. Jeremiah White played the last 20 minutes as a sub, helping Aarhus remain at the top of the Danish league.

Aaron West’s feature “Americans On The Continent” appears every Monday on Goal.com.