ATLANTA BEAT’S HOPE SOLO HAS MOVED BEYOND SOCCER AND THREATENING TO BREAK INTO THE REALM OF NATIONAL SPORTS ICONS. 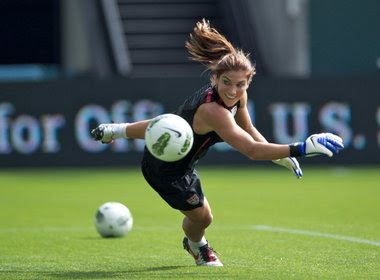 View full sizeDoug Beghtel, The OregonianHope Solo practices with the U.S. women’s national team in preparation for a game against Canada Thursday night at Jeld-Wen Field.

Goalkeepers aren’t normally the face of a soccer team, but Hope Solo’s face has moved beyond soccer and threatening to break into the realm of national sports icons.

Through her play with the United States Women’s National Team and controversial personality, Solo has ascended to a status that few goalkeepers – male or female – have ever reached.

“I don’t think we’ve had such as superstar like that – maybe since Mia Hamm,” said Megan Rapinoe, a midfielder for the national team and former University of  Portland star. “It’s really cool that she and the team have infiltrated the rest of pop culture and not just in the soccer world.”

When Solo and the U.S. Womens National Team face Canada’s Women’s National Team in an exhibition game at Jeld-Wen Field Thursday night, Solo will have already been a very busy person since the United States lost to Japan in the championship game of the 2011 FIFA Women’s World Cup in July.

The former Washington Husky from Richland, Wash., has adorned the cover of Sports Illustrated, will reportedly appear in a provocative photo shoot in an upcoming edition of “ESPN The Magazine” and made her initial appearance on “Dancing with the Stars” television show Monday night and survived the first cut on the show Tuesday night.

“This is one of the most challenging things I’ve done,” Solo said of the show after the team practice Wednesday. “It’s everything – from the dancing itself to being on live television in front of millions of viewers. It’s completely different and almost as nerve wracking as playing in the World Cup.”

Solo said her appearance on the reality show is good for women’s soccer. She said if NFL players, professional skaters (Kristi Yamaguchi) and gymnasts (Shawn Johnson) can compete on the show, soccer stars should compete as well. Solo said one major benefit from her elevated status on the national stage is to help women’s soccer gain mainstream acceptance.

“That is our obligation as female soccer players to keep growing the sport,” Solo said. “After such a remarkable summer and inspiring the nation, it’s a perfect window of opportunity to do just that going into the Olympics.”

All the photo shoots, dance lessons and media attention haven’t completely allowed Solo to forget what happened in the World Cup championship game. The United States, heavy favorites to win its first World Cup title since 1999, couldn’t hold leads on two separate occasions in the game and then fell apart in the penalty kick phase.

“It hurt and stung so bad,” Solo said. “It was really hard to get over it. It was hard to turn that page.”

At least Solo was the national team’s goalkeeper in the 2011 final, instead of sitting on the bench when the United States lost 4-0 to Brazil in the 2007 World Cup semifinal. Solo, who had posted three consecutive shutouts in the tournament, was benched for the semifinal game in favor of veteran Brianna Scurry by then coach Greg Ryan. The benching and embarrassing result prompted Solo into a stunning post-game rant that dissed Ryan and questioned Scurry’s abilities (“There’s no doubt in my mind I would have made those saves”). Solo apologized, but Ryan kicked her off the team for its third-place game against Norway.

That’s not the only time the emotional Solo has gone rogue while building a reputation as a loose cannon with a bit of Terrell Owens thrown in.

Solo, playing for the Atlanta Beat of the Women’s Professional Soccer (WPS) league, was fined $2,500 by the WPS after she used Twitter to accuse game referees of favoring the Washington Freedom in the Freedom’s 1-0 win against Solo and the last-place Atlanta Beat in September 2010.

“Its official, the refs are straight bad. Its clear the league wanted dc in playoffs,” Solo tweeted.

Then there was Solo – once again using Twitter – claiming that “The Riptide,” fans of the Boston Breakers, uttered racist remarks during the Breakers’ 2-0 win against the Beat in August 2010.

“Perhaps the WPS or Boston themselves can finally take a stance to the profanity, racism and crude remarks that are made by their so called ‘fan club,’ ” Solo tweeted. The Riptide group and the Breakers’ team management adamantly denied the accusation.

After helping the United States win the gold medal in the 2008 Summer Olympics and the runner-up finish at the 2011 World Cup, has the “loose cannon” reputation finally been buried? Solo says yes.

“I’ve proven myself to be a very good teammate in…almost my entire career. You can focus on one mistake Nobody else will,” Solo said. “I am not a loudmouth goalkeeper, I am very much a part of this team looking to do good things and win next year’s gold medal.”

The two games against Canada represents the first time the U.S. team has been together since the summer.

“Once I stepped foot into camp, I was so filled with joy to see everybody again,” Solo said. “I was able to turn that page and focus on the Olympics.”

The players will go their separate ways after Thursday’s game, reconvene in November and begin training for the 2012 Summer Olympics in London.

Notes: The two teams finished in a 1-1 draw in the first exhibition game Sept. 17 at Livestrong Sporting Park. Abby Wambach scored on a penalty kick for the United States and Melissa Tancredi scored for Canada. …Former University of Portland star Stephanie Cox is also a member of the U.S. team. …Sophie Schmidt, another former Pilot, plays for the Canadian team. Christine Sinclair, a forward for Canada and former University of Portland star, is taking a break to rest and is not with the Canadian team for the game.