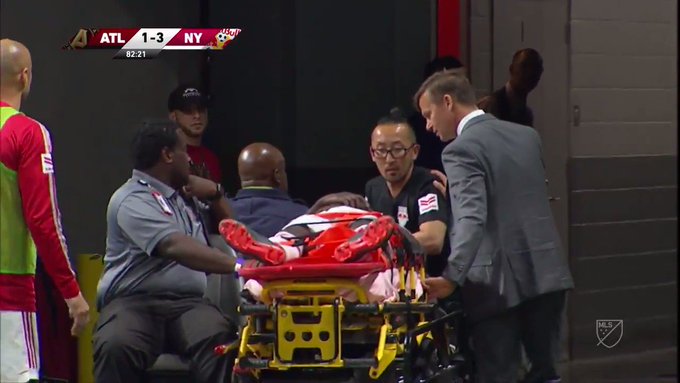 Bradley Wright-Phillips hit a brace after halftime to lift the New York Red Bulls to a 3-1 victory over Atlanta United on Sunday evening, a result marred by injuries to the Red Bulls’ Kemar Lawrenceand Tyler Adams.

After drawing a penalty to help his side pull even late in the first half, Wright-Phillips twice sent headers past Atlanta’s Brad Guzan in the space of four minutes to push the Red Bulls to a fifth-straight league victory.

Those goals pulled Wright-Phillips even with Josef Martinez and Gyasi Zardes for the league lead with eight goals. Earlier, Martinez had a goal disallowed for a foul following a video review.

Atlanta’s comeback task grew even tougher after Greg Garza was sent off in the 71st minute for a violent challenge. But the final stages of the Red Bulls’ victory — including 12 minutes of stoppage time — were subdued after Lawrence suffered an injury after an awkward fall.

The Jamaican outside back left the field on stretcher with his head and neck immobilized, but appeared to be moving his upper extremities.

In the same sequence, an emotional-looking Adams departed the match while showing signs of a right knee injury.