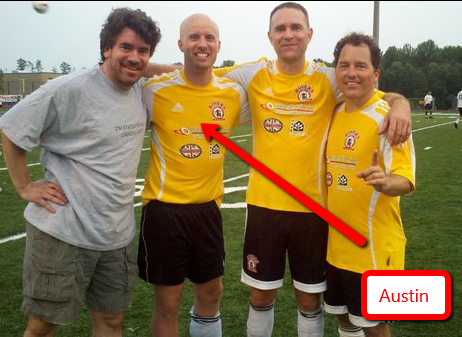 Austin is an outside midfielder that does not get tired. Although he prefers to run the line, he has been known to venture into the middle to wreck havoc on the opposition. Rovers White Player in CASL
Austin has been painting and pasteling for about 14 years. He had exposure to art courses as a child and in high school, but never considered it a legitimate investment of himself until he discovered pastels at a cafe in Gainesville, FL in 2000. He experienced pleasure at the process and result, after casually asking a friend he saw drawing, if he too could give it a try. He found in pastels a freedom and a tactility that he had not yet experienced in any attempt to visually create. Pastels afforded him the means to become acquainted with his movement, to practice the expression with little burden of technique to apply the medium. As so many of his generation, he was powerfully inspired by the freedom of expression he found in Abstract Expressionism, mostly as a conduit to discover his own voice. He was particularly impacted by the works of Kandinsky, arguably a progenitor of that movement.