BE THE FACE OF U.S. SOCCER!

There are still six days left to be the face of U.S. soccer.
Over the past month we’ve been collecting letters written to FIFA by U.S. soccer fans like you. Soon we’ll choose one of these letters to feature in the opening pages of our official Bid Book — so you can tell FIFA in your own words why they should pick the U.S. to host the FIFA World Cup™ in 2018 or 2022.* 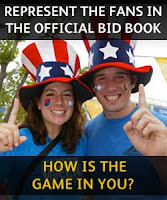 The deadline to enter is December 15th, 2009. Don’t miss this amazing chance to represent all U.S. soccer fans — submit your letter and photo now:
http://www.gousabid.com/LetterToFIFA
There are some incredible stories in the hundreds of letters we’ve already received. Here’s one I’d like to share with you today:
Greetings. For more than 35 years, I have lived and breathed soccer in the United States. As a player, as a high school coach, and even as a Political Science professor (yes, I have taught soccer at university), I have experienced first hand the meaning of the often-quoted phrase that “soccer is democracy on grass.” Anyone can play, whether small or large, quick or slow, black or white, immigrant or native, rich or poor, tall or short. But what makes “democracy on grass” so special in the United States is that here it reflects the incredible diversity of the sport worldwide.
On soccer fields across America, you find virtually every type of person playing the game: whether you are in Iowa or Texas, Illinois or Florida, Oregon or New York, soccer in the United States unites people across languages, races and cultures in ways most other countries cannot. American soccer fields are little U.N. General Assemblies scattered throughout the American countryside where diverse people come together in a common bond, with a common purpose. I have learned Spanish, German, Arabic and even a little Ibo on American soccer fields. Soccer in America gives us the example of democracy as sport that is transferable to democracy as governance. What better lesson could I offer my students than in engaging them on the soccer field?
Can you do a better job of telling FIFA why the Game Is In US? Click here to submit your letter now:
http://www.gousabid.com/LetterToFIFA
Thanks, and I’m excited to see what you’ve got to say.
— David
David Downs
Executive Director
USA Bid Committee
*see official rules for eligibility rules:
http://www.gousabid.com/pages/face-of-the-bid