COLLEGE UPDATE: UGA WOMEN REACH THE SOCCER AMERICA POLL AT NO. 25 IN THE COUNTRY 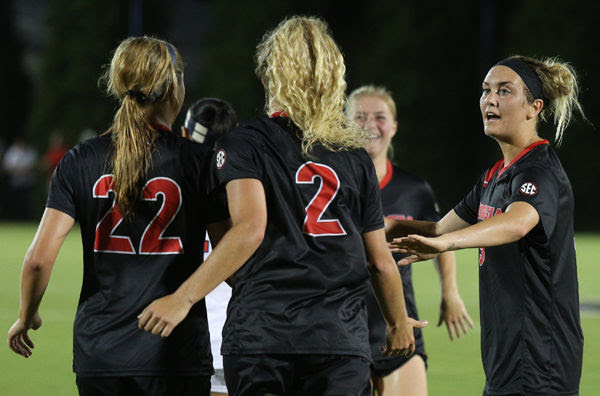 Justin Hubbard
For the first time this season, the Georgia soccer team has entered the Soccer America poll at No. 25 in the country.
Gaining the national ranking caps off a huge weekend for Georgia (4-1-1, 0-0-1 Southeastern Conference).
Sophomore midfielder Gabby Seiler set a new record for most consecutive games with a score (five) in last Friday’s 4-0 win over Houston, while three other players scored their first career goals. The Bulldogs’ 1-0 defeat of No. 17 UCF was their biggest victory since knocking off then-No. 17 South Carolina a year ago.
Louise Hogrell, Georgia’s freshman goalkeeper, was named the SEC Defensive Player of the Week on Monday after securing those two shutouts.
Next up for the Bulldogs is a home matchup against Mercer at 7 p.m. Friday night. They will then travel to Furman for a 6 p.m. game Sunday in Greenville, South Carolina.​
http://www.redandblack.com/sports/georgia-soccer-moves-into-national-rankings/article_e8434f96-383e-11e4-b98e-0017a43b2370.html