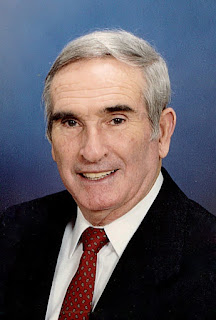 Daniel “Danny” Doogan Hay, age 80, passed away December 3, 2016, in Duluth, GA. Danny was born in Campbeltown, Argyll, Scotland, in 1936 to the late Peter and Margaret Doogan Hay. After serving in the British Merchant Navy, he returned to Campbeltown and operated a fishing boat for several years.

He emigrated to the US in 1967 and settled in Decatur. He worked in commercial construction for 30 years before retiring in 1998.

Danny’s lifelong passion for soccer got him involved immediately in the local Atlanta soccer scene. While he enjoyed playing himself, he found his true calling as a youth soccer coach. His Celtic and Datagraphics teams represented Georgia in a total of 10 regional tournaments, winning two and advancing to the nationals. Danny was the 2003 inductee into the Georgia State Soccer Hall of Fame.

Danny was an avid storyteller and entertained many with tales of growing up in Scotland, his travel adventures in the merchant navy and his years as a fisherman.

Danny is survived by his beloved wife, Elaine; his stepsons: Brad Martin and his wife, Terasa, and Tim Martin and his wife, Julie; step-grandchildren: Caleb, Erin and McLain Martin; his brother, Peter Hay; nephews: Scott Hay, Jack Colville, Danny and Neil McInnis; nieces: Isabel Higgs, Margaret and Frances; numerous great-nephews and nieces; and many more loving family and friends. In addition to his father, who is buried in Decatur, and his mother, who is buried in Campbeltown, he was preceded in death by his sisters Bridie Hay, Sadie McInnes and Mary Colville and her son, Peter.

A Celebration of Life will be held at Turner and Sons Funeral Home, 2773 North Decatur Rd., Decatur, on Friday, Dec. 9 at 2 pm. It will be conducted by Father Sunny, pastor of St. John Neumann Catholic Church where Danny was a member for many years. Family and friends are invited to a visitation following the service. Burial will be private.