Playing in the Over 60 Division of the 2013 Florida Classic at the beautiful Auburndale, Florida facility, the two Georgia teams went undefeated in the tournament played over the MLK Holiday Weekend. 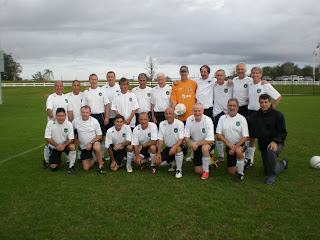 The Over 60 team handily won all of the three preliminary matches in their bracket, scoring 9 times without conceding a goal. In the finals, against International of Florida, after a close opening 45 minutes, the team pulled away in the second half to gain a convincing 5-2 victory. FC Georgia United Over 60 has now won this tournament three times in the last four years. Besides winning the trophy, the team also took home $1,000.00 in prize money, which the club is donating to local area charities.

The Over 65 team, that played against and lost to the Over 60 team in the 2012 finals of this competition, narrowly missed out on being a finalist for a second year in a row. The team ended up a close second  in the other bracket. Only a missed penalty in the 92nd minute of one of their three matches prevented them from advancing to the finals.

In the spirit that “you’re never too old to compete,” the FC Georgia United Club started out several years ago when a small group of “old boys” began scrimmaging on Saturdays in the Atlanta area. Then later, since the group included a number of retirees and others who were able to “play hooky” for a couple of hours here and there, they began kicking the ball around once or twice during the week.

What started out as a small group of guys (also referred to by some as the “slackers”), has now grown to where it is not uncommon to have anywhere from 16 to 20 players show up twice a week during the week, and so many participants on Saturdays that they have to break it out and have two games going. The group now includes several over 50 guys and, recently, over 50 gals, so the level of play has sharpened, making for a more competitive environment for the older players.

The FC Georgia United teams, now more organized, have enjoyed traveling to several soccer events outside of Atlanta. In addition to the Florida Classic, the two teams also competed in the USASA 2012 Veterans Cup National Championships held in San Diego in June (where the FC Georgia United Over 65 team won the Over 65 Division for the third year in a row!, and were recognized in December by Governor Nathan Deal at the Georgia State Capital for their accomplishment), and a combined team traveled to Japan in September, where they played several friendly games against Over 60 teams from in and around Tokyo.

With the increase in the over 50 turnout at the weekly scrimmages, the next logical step underway is gauging if there is sufficient interest and quality to form younger teams to compete in the Over 50 and Over 55 men’s and women’s divisions of tournaments, and competing under the FC Georgia United banner.

Contributing to the Community & Sponsors

One of the more rewarding aspects of involvement with the club is their goal of contributing to various causes. In addition to donating prize money and funds raised from other events, including charity soccer games, FC Georgia United was able to raise over $5,000.00 from players and sponsors for the Miyagi Boys & Girls Club of Sendai, Miyagi Prefecture, Japan, one of the hardest hit areas from the 2011 Tsunami. While visiting Japan last September, these funds were presented to representatives of the Boys and Girls club in a very moving ceremony prior to one of the matches in Japan.

While FC Georgia United has enjoyed good support from its sponsors in the past, they continue to look for new sponsors who share the goals of the club.

Information About the Club 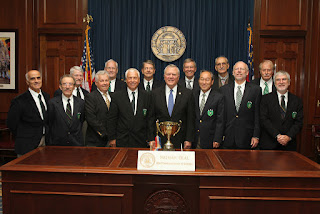 Anyone wishing to learn more about FC Georgia United should contact Steve Lang (Over 60 team) slang02@bellsouth.net, or Dietmar Doehring (Over 65 team) duralinc1@gmail.com.