Atlanta United and Coventry City announced today that midfielder Chris McCann will be joining the Sky Bet League One side through December 31.

What is Coventry City’s history?

The club was formed in 1883 and called Singers FC, as it was founded by employees of the Singer company. Singer started as a bicycle making business before later manufacturing motorcycles and automobiles. In 1898, the name of the club was changed to Coventry City. They moved into their longtime stadium Highfield Road in 1899, they remained there until 2005.
Coventry visited Atlanta in 1970 for a friendly with the Atlanta Chiefs of the original North American Soccer League. 6,773 fans turned out at Tara Stadium in Clayton County to see the home team lose 2-1. Brian Joicey scored his second goal of the match in the 88th minute to win it. 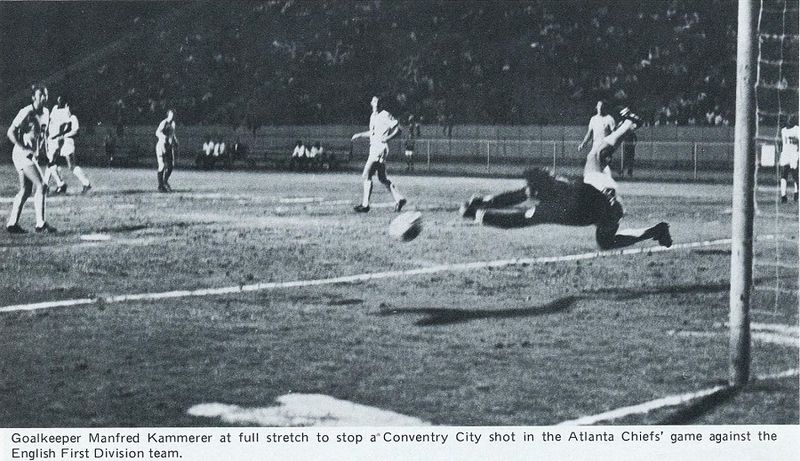 They have won one major trophy, the 1987 FA Cup. They have also reached two League Cup semifinals, in 1981 and 1990. Coventry was a charter member of the Premier League and enjoyed 34 season run in the English top flight from 1967-2001. They spent eleven seasons in the Championship before being relegated to League One in 2012.
Financial issues have plagued the club in recent years, even being forced to play a season away from its home at Ricoh Arena due to going into administration (similar to bankruptcy) over unpaid rent. The Sky Blues returned to the Ricoh Arena in 2014.

What are the predictions for Coventry City in the 2016-17 League One season?

After an eighth place finish last season in League One, the pundits are predicting a slightly worse finish this season.
The team finished last season on a high note, winning four of the club’s last five games. They missed out on a playoff spot for promotion by five points. That disappointment was largely down to a miserable start to 2016, with the Sky Blues losing seven of nine games in a stretch from mid-January through mid-March.
If you are interested in an in-depth preview of the upcoming League One season and Coventry City’s prospects, check out Sideways Sammy’s look at the season.
One familiar face to MLS fans is former Seattle Sounders midfielder Andy Rose. He joined the club last season and played in twelve matches, scoring twice.

How will Chris McCann fit into the Coventry City squad?

Versatility is one of McCann’s strong suits and it will be needed in a fairly small squad at Coventry. He also was part of a League One winning side last year at Wigan and that experience is valuable to a club trying to move up. Coventry City manager Tony Mowbray said:
“He was a crucial part of the Wigan Athletic side who won this league last year and I’ve already seen a good mix of ability and tenacity from him. I want a team who are prepared to play football but also dig in and compete. For that, you need players who can keep the ball in tight areas and play but also have a bit of bite.
Chris has these attributes and I’m delighted to welcome another signing to the club ahead of next season.“
Mowbray has been a proponent of the 3-4-3 formation, but has also shown tactical flexibility. McCann will be a player who can play wide on the left or holding centrally in the midfield of a 3-4-3, but who can also slide to the backline when the situation calls for it.
As things stand now, McCann will be a very important player for Coventry City during his loan spell. He will miss three matches to start the season due to a red card in the final match of last season with Wigan. Where he slides in when he is eligible will probably come down to how the team starts the season.
Source: http://www.dirtysouthsoccer.com/2016/8/2/12359858/everything-you-need-to-know-about-coventry-city