KAKA: CAPELLO MUST INCLUDE BECKHAM IN FINAL SQUAD 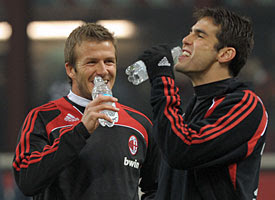 Beckham played his part in their qualifying campaign, although is not guaranteed a place in the final 23-man squad and Kaka, who played alongside the L.A. Galaxy star with AC Milan earlier this year, believes his experience and quality are invaluable.

“David Beckham is one of the most intelligent players I have ever played alongside,” said Kaka. “I am pleased he is going back to Milan, even though I am no longer there.

”I see that as a great move by Milan to take him again because he will be important to them, as he showed last season. But Milan will also be important to him with the World Cup coming up.

“Through playing in Milan in Serie A and Europe, David will be in the right condition next summer, and that is certain to help England at the World Cup.

“That’s why Capello must include David in his squad. There is no-one else who has the experience and quality of Beckham.”