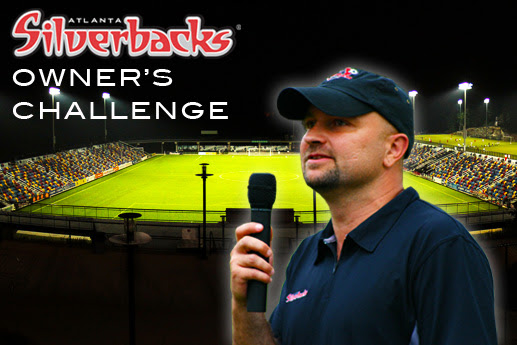 The Atlanta Silverbacks announced the launch of the “Owner’s Challenge” on Friday, giving anyone in the community an opportunity to play a soccer game against Silverbacks owner Boris Jerkunica and members of the team’s front office and coaching staff.

At the heart of the Owner’s Challenge lies a ticket wager between the Silverbacks organization and the participating teams. If Jerkunica and his staff lose, the organization will give the challenging team 30 single-game group tickets or two season tickets for the Silverbacks’ 2012 NASL season. If the owner’s team prevails, the challenging team will have to purchase the same ticket quantity.

“We want to provide the community with a unique opportunity to play both fun and competitive soccer against the people within our organization,” said Jerkunica, who starred at Emory University in the mid-80s. “With that being said, I’m pretty confident in our chances, and I look forward to going out there and showing what we’re made of.”

The challenge is open to the public, with men’s, women’s, coed, and youth teams all welcome to participate. Similar to the leagues that operate during the week at Atlanta Silverbacks Park, the Owner’s Challenge will be played in a 7v7 format, consisting of two 20-minute halves. Following each game, the Silverbacks organization will join the challenging teams for a social hour, featuring complimentary refreshments in the concession area at Atlanta Silverbacks Park.

“There is a tremendous soccer culture in Atlanta, and we feel that the Owner’s Challenge will serve as a great platform to showcase that culture,” said Silverbacks President Michael Oki. “The Challenge is a fun way to interact with the community, and it exposes them to our professional team and our facility.”

To participate, challenging teams can email neal.malone@atlantasilverbacks.com or call 404-969-4900.