Kennesaw, Georgia -Atlanta Soccer News organized the first ever soccer flash mob in Atlanta in a stunt to create excitement for the upcoming season and to bring awareness of the lack of adult practice facilities in Atlanta. On Sunday September 4, approximately 60 people descended on Noonday Park in Kennesaw/Marietta Georgia dressed in regular street clothes in what seemed to be random people enjoying a day at the park. At exactly 430pm, a large red van parked next to the picnic area began to blast loud Samba music from its rear doors. At that moment, all the people that were near and around the pavilion changed out their street clothes and into their soccer gear. Soccer balls were kicked out of the van and people started juggling in groups of four in rhythm to the music.

The juggling continued until local ref Paul Kelly stepped out of the pavilion, blew the vuvuzela and moved the mob onto the field. A game of soccer erupted and the a soccer flash mob came to life. Unlike other games, there were no jerseys and no team, just a massive mob of confused people kicking multiple soccer balls thru out the field. The game continued for 10 minutes with no winners and no losers and 60 red cards courtesy of the referee.
The mob eventually disbanded and broke up into small games and played small sided pick up the rest of the evening. The mob played for a couple of hours and moved the event to Brewters Pub nearby. The event continued into the evening where many of the local soccer cognoscenti including Jeff Montgomery, Marco Garcia and Jim Caruso made their entrances.
“We wanted to raise awareness within the soccer community of the need to have adult playing 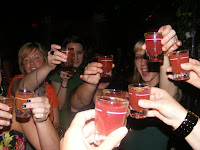 facilities in the Atlanta Area.” Exclaimed event organizer Quique Lopez. “ In Atlanta, most of the parks and other playing facilities are dominated by organizations that leave little room for random soccer players to get together and play unorganized pickup soccer. We wanted to illustrate the beauty of random pickup soccer.”
The event concluded with raffles and silent auction featuring many signed jerseys, balls and gift certificates to local restaurants. The top Prize was a week of intensive soccer training by Coach Ian Wheeler ‘s Total Football Program. The organizers vowed to continue efforts to promote their cause by holding events and tournaments thru out the season at various venues. For information, promotions@atlantasoccernews.com 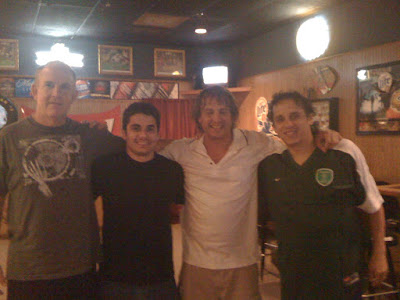