ATLANTA – When the sixth ATL Champions League competition kicks off in May, Atlanta’s soccer community will come together for the biggest edition of Soccer in the Streets’ spring benefit tournament to date. Due to extreme demand for the event’s limited player spots, two complete teams – AC Milan and Barcelona – have been added to the 2016 squad list. 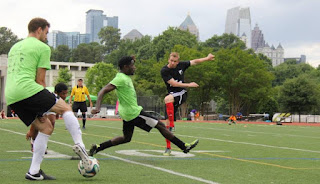 Now scheduled to include 12 teams, the annual ATL Champions League tournament features Atlanta’s soccer fans representing their squad in spirited competition with a much greater purpose: Supporting the youth programming efforts of Soccer in the Streets. Along with the on-field portion of the event, ATL Champions League participants face off to see who can bring in the most donations for Soccer in the Streets’ youth outreach.

Limited player slots are still available, but potential participants are encouraged to sign up as soon as possible to assure themselves a place in the tournament.

The 2016 ATL Champions League is set for Sunday, May 22 at Grady Stadium in Atlanta. Ticketing information will also be released soon for supporters who are looking to join the fun from the stands.
For more information on the tournament – including leaderboards, galleries from past events, and details about how to get involved – please visit our tournament hub: atlcl.soccerstreets.org.