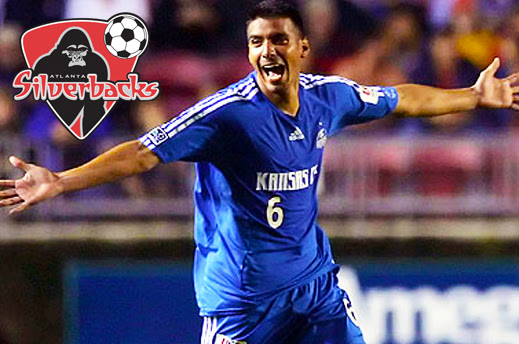 The Atlanta Silverbacks have signed veteran defender JOSE BURCIAGA, JR., the club announced Thursday, pending USSF approval.
Burciaga Jr., 30, comes to the Silverbacks after impressing the team’s coaching staff on trial several weeks ago. The 6-foot-1 defender brings eight seasons of MLS experience to Atlanta after spending the majority of his career with the Kansas City Wizards (now Sporting KC) from 2001-2008.
The Dallas area native made 115 appearances for the Wizards, scoring an impressive 13 goals from the left back position and earning MLS Best XI honors in 2006. He was also a regular with the U.S. youth national team at the U-20 and U-23 levels from 2000-2003.
Burciaga Jr.’s lengthy stay in Kansas City ended in early 2008 when he was traded to the Colorado Rapids. He made 12 appearances and scored one goal in his one season with the Rapids.
A winner of the MLS Humanitarian of the Year award in 2008, Burciaga Jr. has spent the last several years training with top-level Mexican and American clubs, while running a Dallas area youth soccer club.
Burciaga Jr. has already joined his new teammates in Atlanta and is expected to be available to play in the Silverbacks’ second-round U.S. Open Cup game against NPSL side Georgia Revolution in Conyers on Tuesday night.