THE FATHER CHRISTMAS CUP BRINGS THE ATLANTA SOCCER COMMUNITY TOGETHER FOR A GREAT CAUSE. The Father Christmas Cup is an Event that exemplifies the power and unity of the Atlanta Soccer Community.    The Atlanta Soccer News is dedicated to this community and urge all those in our community to support this great cause. Please let us know if you can help. 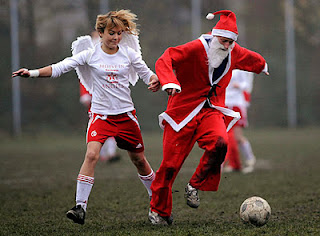 
The Father Christmas Cup came to be as a result of a discussion one night in September 2003 between a group of friends in a local pub, what was then the old Fado Fado, in the Buckhead bar district of Atlanta Georgia.

One of the group recalled how soccer and war had been intertwined throughout the ages and we all remembered how during World War I it was often cited that on Christmas Eve in 1915 a truce was struck between the Germans and the English to celebrate Christmas. The truce lasted Christmas Day and part of the following day- Boxing Day- and how an impromptu soccer game ensued in no-man’s land between the trenches.

After the success of the first fundraiser, many who supported the effort felt that it would help increase donations if we named the family who would benefit from the fundraiser. It was agreed that by doing so, friends and family of the beneficiary’s family would then be able to participate in celebrating the day, remembering the person whose family we were helping. And so, in 2004 we remembered a local military serviceman who passed away and leaving behind a wife, a son and a daughter.

In 2005, we lost one of our own close friends who was killed in a tragic accident. He was a popular and prominent figure in the adult soccer league in Gwinnett County and many who had played with him over the years wanted to raise money to help fund his daughter’s college fund. Because so many people knew him personally there was a huge outpouring of support for this event and four teams competed for The Father Christmas Cup trophy at Bethesda Park, including his old team mates from Pipers and Celtics. The Father Christmas Cup really took off that year as the word spread throughout the Atlanta soccer community the unique nature of the benefit.

Unfortunately in 2006, we lost another local soccer player. He was playing soccer at Silverbacks Park with his Vintage Genesis teammates when he collapsed and was unable to recover. He left behind a wife and two sons. Four teams, Vintage Genesis, Pipers Silverbacks, and Atlanta Olde Stars North and Atlanta Olde Stars South competed for the Father Christmas Cup and the Atlanta Silverbacks organization graciously donated the use of the fields for the fundraiser and have continued to support it ever since.

In 2007 we remembered another member of the local soccer community, who left behind a wife, son and a daughter. His involvement in soccer in the Atlanta area ranges from his role as a key organizer in the early days of the Soccer Alley league (Buckhead), to volunteer coaching clinics in Roswell, to playing in several leagues, including Soccer Alley, Buckhead (Carl Sanders) YMCA, ADASL, CARSL and last, but not least, the Roswell Soccer Club Adult League. Again four teams participated with many of his former team mates coming out of retirement to play. Because of his involvement in the soccer community, the Father Christmas Cup took a huge step in its growth as new people volunteered to support the running of the event.

In 2008 we lost another close friend, a long-time recreational coach at Metro-North Park and father of three NASA/MNYSA players—a daughter and two sons. Coaching from Mighty Mites through U-12, he was a familiar figure at Metro North, always ready to laugh or lend a helping hand. An avid supporter of the NASA TOP Soccer program, he was a strong presence in the goal for their Sunday afternoon games. We also remembered two other local players. One played recreational soccer and coached many teams in Roswell. He won a state championship with his U-10 Boys Team during his first year with Roswell and coached several girls’ teams from U-12 to U-19 age groups. The other played soccer with Majestic’s and was known for his big smile and love of the game.

The success of The Father Christmas Cup has been accomplished only because of the grass root support and overwhelming generosity of the Atlanta soccer community.

Find out about this year’s Father Christmas Cup event

Please consider making a Donation
For Corporate Sponsorship opportunities please info@atlantasoccernews.com
If you have any questions or you would like to volunteer, please contact us.