THE RISE OF THE 40-YEAR-OLD FOOTBALLER The 40-Year-Old Footballer: Paul Scholes, Ryan Giggs a Sign of Things to Come?

The 2011-12 football season across Europe’s top five leagues was a fine vintage. It was also a fine season to be vintage—as demonstrated by the likes of Ryan Giggs, Paul Scholes, Javier Zanetti, Didier Drogba, Raul and Andrea Pirlo.

If the game really is getting faster and more intense with every season, these comparatively wizened old men—in football terms at least—had no right to be playing central roles for teams competing in the upper echelons of European football.

But there they were.

Giggs and Scholes, aged 38 and 37 respectively, both started in Manchester United’s midfield for their most important Premier League game of the season—away to Manchester City. Both will be back in red come August.

Zanetti, at 38, played 34 Serie A games for Inter Milan and will attempt to do the same again next season.

The 34-year-old Drogba provided Chelsea with arguably the most forceful physical presence of any player to grace the 2011-12 Champions League—and played match-winner in the final.

Pirlo was imperious. At the fulcrum of Juventus’ midfield, the 33-year-old was as influential as anybody in their run to the Serie A title. Some would argue he’s in the best form of his life.

And then there’s the mercurial Spanish striker Raul, who will not be short on offers this summer after scoring 15 times and providing five assists in the Bundesliga with Schalke. He’ll be 35 in June.

So what’s their secret? How have these most evergreen of footballers held back the onset of time? And is their longevity indicative of a trend toward playing steadily getting older?

To find out, I spoke to Ron Maughan, who serves as Emeritus Professor of Sport and Exercise Nutrition at England’s esteemed Loughborough University and has acted as an adviser to FIFA and the English FA on such matters.

“What we have to recognise first is it’s nothing new,” Maughan said. “Stanley Matthews was still playing aged 50, Tom Finney at 38. Bobby Charlton was in his late 30s. But what we are seeing now is a lot more players going longer.”

Maughan cites a number of factors for this:

If you look at the guys who are playing into later life, they’re not the guys who lead the lifestyle we associate with footballers. It’s partly come down to better education—them appreciating if they lead the lifestyle of George Best, they’ll be done by 25.
Then there’s advancements in sports medicine. We have much better programs for injury prevention and treatment now. The main reasons players retire is that they’re either burned out or injured. Deal better with those and you extend the professional life of players.
The protection offered by referees in the modern game has also made a difference. Referees didn’t offer that protection in the 1970s. These days they look after the players, which contributes to how long they can go on for.And even if they do get injured, the whole rehab process has advanced, too.

Giggs is an example of a player to have fully embraced advancements in sports science. His love of yoga has been well documented, and according to a report in The Telegraph, his routine also includes regular ice baths, time on a vitamin D bed and use of a gravity-free treadmill.

Then there’s the detailed stats-tracking software United use. With coaches able to monitor players’ training and match performance so closely, it’s far easier to detect fatigue and tailor a program to get the best out of individuals.
Said Giggs, as per The Telegraph article:
With all the stats that you get, you can’t hide. You can’t duck out of training or not work hard because it’s all monitored.
We all have private programs, so you get your clipboard and then monitor what you do every day. If you’re not working hard on a regular basis, you will get extra running or extra weights to make up for it.
According to a study carried out in 2011 by the Professional Football Players Observatory (PFPO), in Switzerland, the average age of players in Europe’s top leagues for the 2010-11 season was a fairly predictable 26.78.
Perhaps surprisingly, though, the most common age group in squads was the 31-34 bracket, which accounted for 34.1 percent of players.
“We are seeing that players in the top leagues are becoming older, faster and are getting taller,” said Raffaele Poli, co-author of the study, as per a Reuters report in January 2011.
That said, the data gathered by PFPO also suggests—marginally—that the most successful clubs in Europe’s top five leagues tend to have the youngest average squad age.
So, what to make of it all?
What we can say with authority is that developments in sports science are making it increasingly feasible for footballers to play into their mid-30s and beyond.
While these are being counteracted by an ever-maddening speed of play, the game we see today is far less physical—in terms of body contact and strength of tackling—than it was even 10 years ago.
“Strong is no longer strong,” so goes the recent Nike commercial. “Fast is the new strong.”
They’ve got a point.
What it means is this: If aging players can lean on new techniques and technologies to keep their sharpness, they don’t necessarily need the brute strength they would have required to stay at the highest level 10 or 20 years ago. 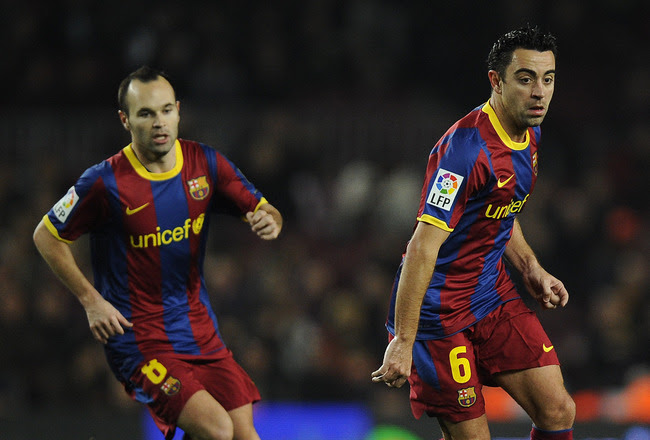 Could Iniesta and Xavi be just getting started?
David Ramos/Getty Images
That’s the reason Sir Alex Ferguson continues to trust in Giggs and Scholes. And that’s why the oft-spouted notion that Barcelona’s golden era is about to end could prove spectacularly flawed—should the likes of Xavi and Andres Iniesta have another five or more years left in them.
It’s entirely possible, especially when you consider the attributes that make them effective. In fact, Maughan has a theory that plays right into their hands. He believes the more unselfish a player is, the more chance they’ll endure.
“Those who keep going tend to be team players—who bring a cohesion that’s hard to explain,” he said.
“They mobilize others and inspire them to do well. So even if fitness levels wane, they’re still important. They can still be a central figure.”
Chelsea could be another example of a team who’ve been written off too early. “Everybody says Chelsea are past it, but they have a few players who may well have a couple of good years left,” said Maughan.
For now, the oldest outfield player to win the European Cup remains Ferenc Puskas, who was 39 years and 39 days old when Real Madrid triumphed in 1966.
It’s a record we shouldn’t expect to stand for too much longer. Soon enough, a 40-year-old footballer will have his day.