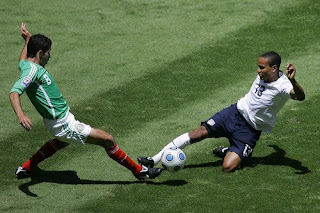 MEXICO CITY — – The dream lasted all of 10 minutes plus a few seconds.

It began with Charlie Davies’ goal for the United States 8:44 into its World Cup qualifying match against Mexico at Azteca Stadium on Wednesday afternoon.
It ended with Israel Castro’s goal for Mexico 18:57 into the game that tied the score at 1-1.
In between those goals, the American players and coaches – if they had had time to catch their breath – might have contemplated the first U.S. victory in history over Mexico in Mexico.
As it was, it was the first time in the 43-year history of the stadium that the U.S. national soccer team had held a lead over Mexico at Azteca.
A victory by the Americans would have ended a 0-22-1 streak of futility stretching back to 1937, but it was not to be. Having tied the match, Mexico set out to win it and did so on a goal by Miguel Sabah in the 84th minute to prevail, 2-1.
By the time the final whistle sounded, fans in the sellout crowd of 105,000 were pelting American star Landon Donovan with beer cups when he went to take a corner kick.
It was that kind of day.
As Donovan said, “It is what it is.”
Mexico’s victory has revived its once-floundering chances of reaching the 2010 World Cup in South Africa, while the loss has done little harm to American chances.
The U.S. still holds second place in the six-nation qualifying group, two points behind Costa Rica, which lost to Honduras, 4-0, on Wednesday night.
Mexico remains in fourth place, one point behind Honduras.
“It wasn’t a do-or-die game for us, it was for them,” Donovan said in the chaos of the post-game news conference. “Now, it puts us in a little bit more difficult position, but our next game is at home against El Salvador [on Sept. 5 in Sandy, Utah], which we expect to win, and away against Trinidad [on Sept. 9], which we expect to win.
“I still feel if we win those two games we’re going to qualify.”
It was Donovan who created Davies’ goal, sending a slide-rule pass out to him on the left flank. The forward cut in toward goal and then curled a shot past Mexico goalkeeper Guillermo “Memo” Ochoa and into the upper right corner of the net.
Davies’ goal was only the second scored by an American player against Mexico in Mexico in the past quarter-century. The only other one was scored by Eddie Lewis in the 2005 qualifier at Azteca that the Americans also lost, 2-1.
“We played well in the opening part of the game and deserved it,” Donovan said. “It was a good goal.”
Mexico, looking smoother Wednesday and more polished than the Americans, carried the game to the U.S. and was rewarded a mere 10:13 after Davies had scored.
It was the Chicago Fire’s Cuauhtemoc Blanco who set up Mexico’s first goal. Blanco, the oldest player on the field at 36, spotted Mexico teammate Castro unmarked at midfield and passed the ball to him.
Castro took a shot from distance and saw his effort crash into the underside of the crossbar and then rebound down into the net. U.S. goalkeeper Tim Howard stood no chance, but blame for the goal could be shared by defensive midfielders Ricardo Clark and Michael Bradley, who both were playing too deep and had no time to close Castro down.
The winning goal was a little bizarre, or at least fortunate.
Mexico was attacking down the right flank, seeking the game-winner, when Donovan and defender Jay DeMerit tried to tackle the ball away. It was DeMerit who swept it away, but the ball fell to Sabah and his shot flew straight and true over Howard and into the net.