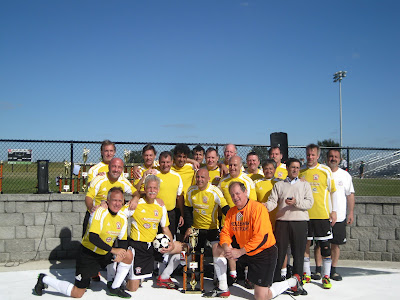 Atlanta veterans Rovers Red won the 2012 Florida Classic over weekend. The Rovers Red is part of the Rover Soccer Club of Atlanta, the largest veterans soccer club in Georgia. The club is known for having a long tradition of teams winning many local, regional leagues and tournaments including 2 National Championships. The club has teams in over 30, 40, 50s and 60s
The Florida Classic is FSSA’s premier international tournament. 11-a-side – New Lake Myrtle Sports Complex, Auburndale, Florida; tournament coincides with the MLK Holiday Weekend.

Rovers FC Red glided home on a cloud after taking the over fifty-five championship in the 2012 Florida Classic from the New Briton Falcons with a 3-1 final. The Falcons dealt Rovers Red a blow in the initial meeting on Friday night 4-0 and then quickly dispatched the other two competitors winning all three of their qualifying matches.

Rovers went into Sundays match trailing the Silver Strikers who had defeated SABR on Friday night but lost to the Falcons on Saturday. By all accounts this was the semi-final game and a must win for Rovers. The newly formed Rovers squad began to gel on Sunday and we went away with a 3-1 victory and a place in the finals. The team fielded for the Florida Classic included a core of our regular Rovers of Mike Atsalis, Martin Clark, Mark Collins, Terry Flanagan, George Georgiou, Edwin Hoenderdos, and Tash Tasova to which we were complimented by Ali Bashiri, Ciaran Brennan, Jerry Casteneda, Nasser Chelooee, Jerry Hudson, Bobby Ingwersen, Peter Kealy, Moe Khoshbou, Frank Loureiro, Mike Nova, Jay Poorak, Billy Robertson, and Essie Shahrezaei.

The final was a stellar performance by all. After being schooled somewhat on Friday by the same New Briton Falcons, Martin made the necessary adjustments, to which, all responded admirably and the breaks fell the Rovers way. Rovers Red faced a steady wind in the first half and a confident opponent but about twenty minutes in Martin knocked one off the post from outside the box to put us in the lead. The Falcons had not trailed in the score to this point in the tournament and were visibly shocked. They did however level the score at 1-1 just before half with a very nicely placed shot from outside the box.

The second half was a mixture of intense pressure from the Falcons and counter-attacks by the Rovers. Ten, or so, minutes into the half Martin and Ali Bashiri broke down an attack at the edge of our defending third. The ball fell to Martin who lashed a worm burner through the attacking Falcons onto Tash’s foot who went in from the mid-field stripe largely unopposed and finished with a clever feint to his left and a toe poke to the keeper’s right into the righthand corner of goal. The clincher came with fifteen minutes remaining as Martin drew defenders and keeper away from goal and lofted a floater over the keepers head into the back of the net to set the dagger blow, tally his fourth goal of the tournament, and secure the Golden Boot.

‘Man of the Match’ was Moe Khoshbou. Moe set the tone with a half dozen or more crunching tackles early in the game and never let up. He seemed to come out of nowhere to be exactly where we needed him to fend off the relentless Falcon attack.

Capain Terry Flanagan on the tournament “Thanks to everyone for making this a very enjoyable event, both on and off the field. We had the highs, the lows, joy and frustration but that is what its all about. We had our differences but the one thing we all have in common is love and passion for the beautiful game. We are truly lucky to still be playing…win or lose. But winning is always much better.A notable for me is Jerry Hudson, he was steady and consistent not just in the final but in all four games.”

“I do have a nice little memento of a stud marks bruise above my knee, but I wear that proudly after this tournament. Thanks to the goal machine Martin for not only his goals, but his passion, however loud and acerbic. Everyone played great, and it was the little things that were the glue that pieced this glorious display together, from everyone that were mentioned before, to Ali and George playing through their calf and knee problems, to Bobby smartly receiving the throw-ins during the last few minutes of the finals, continuously winning us more throw-ins and winding the clock down. We started as a misfit bunch, but gelled into a single minded collective that gave the reigning national champs a kick in the nuts. We will now have a tradition of eating curry before each final. Cheers to al”- continued Flanagan.

The Rovers Red will continue this spring in league play and prepare to defend in title for next year.