Laura Eddy’s career with the Georgia soccer team has been fraught with injuries, but that didn’t matter Monday night when she sent the Bulldogs to the quarterfinal round of the 2014 Southeastern Conference Tournament. 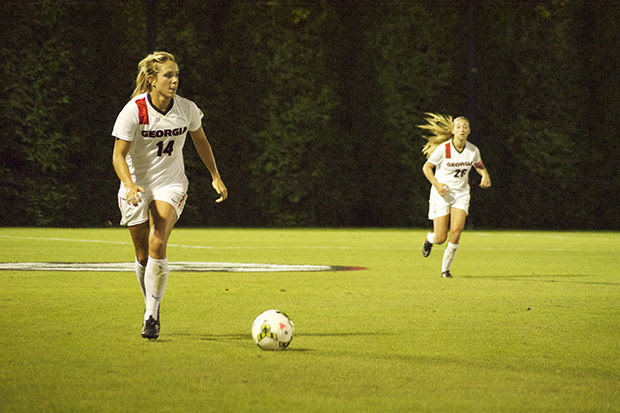 The eighth-seeded Bulldogs tied Arkansas 1-1 through two overtime periods, then Eddy pushed Georgia to the win in penalty kicks (4-3) after Morgan Orobello, who was playing in her first collegiate game, made two saves to help give Georgia the upper hand.

It was Georgia’s first penalty kick game since 1999, and just the third in program history.
“It doesn’t happen often that you get to dogpile,” Bulldogs head coach Steve Holeman said after his team’s celebration. “I’m proud of the girls and their effort. They fought for 110 minutes and I’m just excited they got the win.”
Georgia (10-6-2) and the No. 9 seed Razorbacks (8-6-6) traded possessions in the first half, but neither team found the goal.
Sophomore midfielder Gabby Seiler had some good looks at the net, but Arkansas goalkeeper Cameron Carter kept her from scoring.
Georgia finally broke through after halftime in the 67th minute. Sophomore forward Rachel Garcia drew Carter outside the goal, leaving the net wide open. She bounced the ball off the crossbar for her fifth goal of the season, putting Georgia ahead by one.
Following Garcia’s goal, the Bulldogs were unable to score again, but played solid defense to keep the Razorbacks on their heels.
That all changed when Arkansas tied it out of nowhere.

In the 89th minute, Erika Miller launched a shot from about 25 yards out and squeezed it into the high right corner of the goal to tie it for the Razorbacks. It was the first time Arkansas had scored against Georgia in over six years.

The Bulldogs were left scrambling a bit after blowing the lead, but were able to keep Arkansas at bay for the rest of the period as the game remained tied and went to overtime.
The teams traded possessions in two, 10-minute overtime periods, but neither was able to score and the game went to penalty kicks.
Freshman Louise Hogrell, who has played every minute this year for the Bulldogs as goalkeeper, was surprisingly replaced by the redshirt freshman Orobello when the penalty kicks period began.
Holeman explained afterwards that the decision to put Orobello in the game during a penalty kick situation was made on Sunday, calling it a “yesterday decision.” It was her first time playing for the Georgia program.
Stefani Workman, who coaches Georgia’s goalkeepers, ultimately made the decision to replace Hogrell, Holeman said.
“As we got into double overtime and it looked like that’s where it was headed, she came to me to confirm and I told her it was her call,” Holeman said. “To put it into perspective, that was Morgan’s first minute of college soccer. What a great moment for her, and she came up huge.”

Orobello allowed three goals, but her two saves were enough to afford the Bulldogs an advantage.

She said she was nervous at the beginning of the penalty kicks, but eventually settled in.

“I was nervous until they scored their goal and then when I stepped out there I wasn’t anxious like I usually am,” Orobello said. “It felt good [to get those saves]. I’m happy I got there. And I knew Laura would make her shot. I was pumped. We all came through for each other. It feels great.”

Garcia, Seiler, Marion Crowder and Eddy all scored for the Bulldogs to clinch the game.