TWELVE YEARS AGO, WENGER HAD THE CHANCE TO SIGN ZLATAN IBRAHIMOVIC …WHAT WOULD HAVE HAPPENED

Arsenal’sirrefutable decline from Premier League contender to a challenger only for third or fourth place in the table has been accompanied by a gradual deterioration in the standard of players at the club. It is, no doubt, difficult for Arsene Wenger to keep a limit on spending while maintaining a consistent level on the field. He hasn’t managed it.

Out have gone bonafide champions like Dennis Bergkamp, Robert Pires, Patrick Vieira and Ashley Cole. In their places have come Andrey Arshavin, Theo Walcott, Tomas Rosicky and Andre Santos. Wenger’s eye for a player has been out of focus lately, whether those allied with Arsenal would like to admit it or not.

Arshavin, Rosicky and Yossi Benayoun simply do not animate Arsenal as their predecessors have done in the last decade. Indeed, that trio fits the bill perfectly for those who typecast Arsenal as a team heavy on talented, but unaccountable, ball retainers. The charge remains that the players lack the requisite physical and mental prowess to deliver performances of fortitude and courage at definitive moments throughout a season.

Twelve years ago, Wenger had the chance to sign the very player who could have given them that inspiration. In late 2000, a Swedish teenager by the name of Zlatan Ibrahimovic visited Arsenal’s London Colney training ground. He had just finished a season in Sweden’s Allsvenskan with hometown club Malmo and, along with his representatives, was on the lookout for a new club among Europe’s elite.

The Arsenal at the turn of the century was the Arsenal of Tony Adams, Vieira, Pires, Bergkamp and Thierry Henry – experienced, successful players. Zlatan could have learned at the knee of Henry and Bergkamp before going on to lead the new generation once the old guard was jettisoned. He would have been a perfect candidate to help bridge two Wenger teams. Those are, in plain terms, the one that won things and the one that doesn’t. Zlatan has won league titles in each of his last eight seasons, notwithstanding Juventus’ pair of revoked Scudetti. Arsenal are trophyless since 2005.

Ibrahimovic was a coveted prospect—19-year-old, teeming with potential but developing a burgeoning reputation as a difficult character. He left Arsenal without signing terms, the exact reasons for which have been disputed to this day.

What is for certain is that Zlatan’s single-mindedness and Wenger’s domineering demeanor created an impasse. The inexperienced, precocious Zlatan would not allow himself to be bullied when he perceived it. He attended a meeting at the club ahead of a purported 3 million pound move and described the encounter in his autobiography.

“I felt like a little boy when I entered his [Arsene Wenger’s] office. I shuddered a bit when he looked at me. It was like he tried to see through me, or figure out who I really was deep down. He is the kind of bloke who keeps psychological profiles on his players, to decide if they’re emotionally stable and things like that.

“He is very particular, like all great managers, and I didn’t say much at first. I was shy and just sat there silently, but after a while I lost my patience. Something about Wenger provoked me. Every now and then he’d get up and check who might be passing by outside his window. He seemed like he wanted to have total control.

“He kept going on about how he wanted me to attend a trial at the club. I wanted to behave properly, but those words really got to me. I wanted to show him what I could do. ‘Give me a couple of football boots. I’ll try out, I’ll do it right here, right now,’ I said to him.”

Zlatan’s impetuousness buttered no parsnips. There was no trial, no deal to be made. He joined Ajax instead, for around 8m pounds, and has since flourished into one of the most forthright, effective attacking weapons in the game. Arsenal, for its part, has subsequently scrabbled around for decent strikers, Robin van Perise aside. Francis Jeffers, Jose Antonio Reyes, Nicklas Bendtner, Marouane Chamakh and others have wilted at Highbury or at the Emirates, incapable of emulating Wenger’s ‘first’ team or supplementing the recent superhuman efforts of the Dutchman. Simply put, the manager missed out on Zlatan and instead turned his currency towards inferior players.

The Sweden captain has not expressed regret about his failed Arsenal move. Significantly, Arsene Wenger has. It is little wonder. He has spent the best part of a decade coaching a team which has failed to vanquish the type of plankton on which Zlatan feasts.

Matches against the lesser lights of the division, for Arsenal, are no longer a given. Too often, Wenger has stood helplessly on the sidelines as his team toils fruitlessly to make a goalscoring breakthrough. Think only of this season and you could be reminded of dropped points at Bolton, Swansea, Fulham and Blackburn—10 points squandered against the Premier League’s minnows.

A slur on the reputation of Zlatan, leveled against him throughout his career, is that he is a flat-track bully, a striker who plunders goal after goal against the also-rans of the division while shirking goalscorer’s responsibilities against direct rivals. It’s patently untrue and does not stand up to close scrutiny. He has weighed in with his fair share of championship defining-strikes. Granted, he does too score against the small teams, but someone has to. And that sort of nonchalant ruthlessness is a key element which has been sorely lacking for Arsenal of late, especially when Van Persie has needed to be relieved of the goalscoring burden.

In this arena, the Champions League, Zlatan has endured the snipes most bitterly—specifically in England. Commentators and columnists are quick to pounce on Ibra, constantly reminding the world of his modest record in the competition. 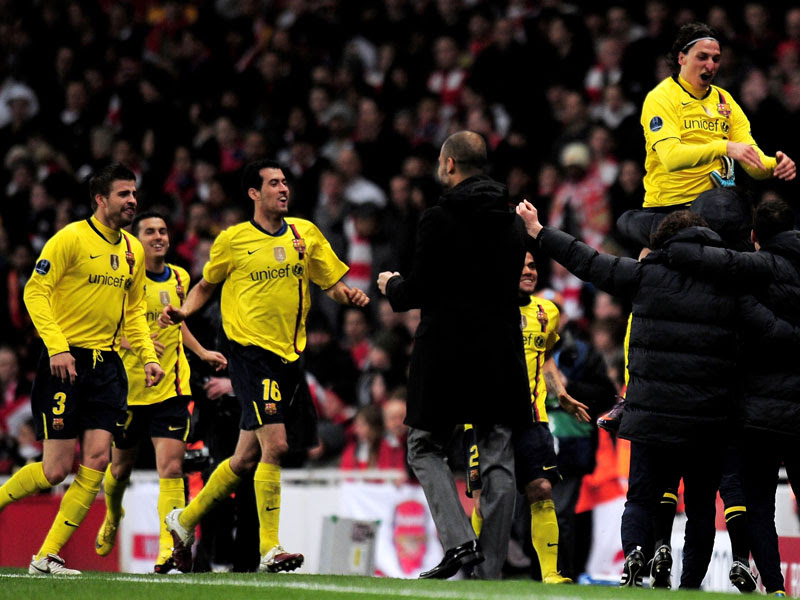 Of the occasion of Barcelona’s clash with Arsenal at the Emirates in 2010, Zlatan wrote: “As usual in England I had the opposing fans and the journalists against me, and they all talked. He never scores against English sides. I attended a press conference, and of course I tried to be myself. I said something like: ‘Just you wait and see. I’ll show you’.”

He scored twice as Barcelona set itself up for a semifinal match-up with his former club Inter. That night brought forth precisely the type of substance which has come to define Zlatan, when he is inspired, and which has been conspicuous by its absence in Arsenal ranks.

But the fate of this cup and the fate of Zlatan are not, and never have been, intertwined. In truth, he has never come close to winning it. Inter won it the year after he left; Barca did the same thing. What’s the key to winning the Champions League? Selling Zlatan would be a glib response.

This week the 30-year-old admitted that winning the European Cup was no longer a ‘priority’ for him, that he could be satisfied with his legacy and his career’s worth of honors. In an AC Milan team which have won four of their last 19 Champions League games, and he with only three knockout goals to his name, Ibra is unlikely to be shaking Michel Platini’s hand as a victor in Munich in May.

However, if he can re-ignite the fire in his belly, that fire which burned intently on the night he proved to Pep Guardiola and the British media that he was a man of fortitude, then he could serve to remind Arsene Wenger what he has missed and emphasize that he truly is the one who got away. Goal.com